‘Breaking Point’ campaign exposes the crisis in council finances after £16bn in cuts since 2010 – and warns more councils may follow Northamptonshire into bankruptcy.

Leader of Halton Borough Council, Cllr Rob Polhill and the Halton Labour Group of Councillors have joined with Labour councillors from across the UK to call for a real end to austerity for local councils. Tory cuts mean councils have lost 60p out of every £1 that the last Labour Government was spending on local government in 2010. Pressures on councils are increasing – last year councils were forced to spend an extra £800 million on vital services to protect children, and with an ageing population and growing demand adult social care faces a funding gap of £3.5 billion. Across the UK only 14% of council workers are now confident that vulnerable local residents are cared for. Halton Council will have lost £63 millon in government funding since 2010 by 2020, 61% of its income.

The ‘Breaking Point’ petition is the most-signed petition of Labour councillors ever – with over 5,000 Labour councillors calling on the Prime Minister and Chancellor to use the Budget to cancel a further planned £1.3bn cut to councils, and to provide an immediate cash injection to stop children’s services and adult social care from collapsing. It has been signed by almost every Labour councillor in Halton and has now been handed in to 10 Downing Street ahead of the Budget on 29th October.

“The Breaking Point campaign has our total support. We’ve joined together with Labour councillors from across the country to send a sharp warning to the Prime Minister and Chancellor that austerity is driving councils to the point of total collapse.

“We are delivering a powerful message to the Prime Minister and Chancellor that councils simply cannot take any more cuts. If the Budget doesn’t reverse the further cuts planned to local government for next year then more councils will collapse into bankruptcy, causing devastating effects for children at risk, disabled adults, and vulnerable older people.” 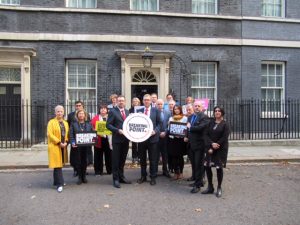 Our MP Derek Twigg, has today written to the Chancellor of the Exchequer in support of the Leader of Halton Borough Council, Cllr Rob Polhill’s, call for a reversal of the planned cuts to Halton’s government funding, to urgently address the £5.8 billon gap in funding that council’s face by 2020 and to provide Halton […]

Halton’s Labour Council is delighted that the Mersey Gateway has now opened, on time and to budget. That one of the smallest local authorities in the country was able to deliver this, the largest infrastructure project outside London, is an achievement to be proud of. The feedback from Halton residents has been overwhelmingly positive. It […]